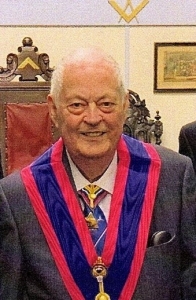 V. W. Bro. A W Weed PGJO, passed to the Grand Lodge above on the 12th September 2020, and will be remembered by many across our Province for his travels across the length and breadth of Cornwall to support Lodges and the Province at installations and celebration meetings.

Arthur was born at Brighton on the 5th November 1939.

He trained as a structural engineer, working in many different countries across the world, Ghana, Bahrain and Saudi Arabia, to name but a few. Arthur married Irene on the 15th July 1961 and have two children, they all moved in the early 80’s to Chilla, at Halwill Junction, Devon, to run a small holding, they did this for ten years. Arthur then decided to go back to his trade as a Structural Engineer and start a new business based at Chilla which he ran until he became unwell.

Arthur joined Freemasonry in 1966, being initiated by his father into the Arts and Sciences Lodge No5626, in London, when he moved to Devon he joined Granville Lodge at Bude. Arthur was a very dedicated and well respected Mason, he belonged to numerous degrees and a number of Lodges, I think about 15 Lodges in total, he held many offices in the different Lodges.

I think Arthur would agree that the Mark Degree was one of his favourite degrees,

He was a member of Sir Bevil Granville Lodge No1231, Tintagel Castle Lodge No1800,

Cornish Installed M.M.M. Lodge No1332, Edwin Perry Morgan Lodge No1632, Holsworthy Mark Lodge No1727 (Devon) and the Grand Stewards Lodge (which as Arthur would often tell us has “no number”)

Arthur was also a founder member of Cornwall Mark Wardens Lodge No1885 and Lyver Ha Pluvenn Lodge No1884.

Arthur was also a member of the Royal Ark Mariner Degree being a member of Sir Bevil Granville Lodge No1231, Cornish    Installed Commanders Lodge No1332 and Edwin Perry Morgan Lodge 1632.

Arthur was also a member of the Ancient and Accepted Rite of the Rose Croix,  being a member of two Chapters.

Launceston Castle No1037 and Laurie Francis No1137, he was Prelate in both Chapters and had received his 31st Degree.

Arthur was a member of Granville Lodge No3405 and also a member of the Granville Holy Royal Arch Chapter No3405, both of which meet in Bude. Arthur received also London Grand Rank in the Craft and received his Fifty year pin in 2016.

As we know Arthur had received many appointments in the Mark Degree, being Provincial Assistant Grand Director of Ceremonies in 2000, Provincial Grand Senior Warden in 2002, Grand Steward in 2005, Past Grand Junior Deacon in 2008 and being promoted to V.W.Bro. as a Past Grand Junior Overseer in 2016, as well as being a recipient of the Provincial Grand Masters Certificate of Service to Mark Masonry and holding the rank of Royal Ark Mariner Grand Rank

As you can see Arthur has had a very distinguished career in Freemasonry.

My wife and I became very good friends of Arthur and Irene, we went on holiday together, one of Arthur’s customers had a house in Cyprus, which we had for couple of weeks, we had a trip to Southern Ireland and many trips to Irene’s homeland of Scotland, visiting the Isle of Arran, Isle Mull, Isle of Sky and also to the Outer Hebrides, which I think Arthur found particularly enjoyable. On one of our trips to Scotland we took a trip out on a fast Rib boat which Arthur was a bit apprehensive about! to a place called the Corryvreckan which is a giant whirlpool, that is if you catch the tide right, on our way back we came across a pod of Dolphins , I think Irene particularly enjoyed that trip.

We have also been on a couple of narrow boat outings with Mark and Debbie Hocking making us six in total, we all had a  wonderful experience with the six of us on a narrow boat as you can imagine!

Arthur we all thank you for allowing us the privilege of knowing you.

We all wish Irene and the family all the best for the future.

Arthur was a committed, dedicated and passionate Freemason, a lovely man who was great company. He is a great loss to Cornish Freemasonry and will be sadly missed by many.

Gone to assist the Great Architect of the Universe in all his undertakings. We will miss you Arthur