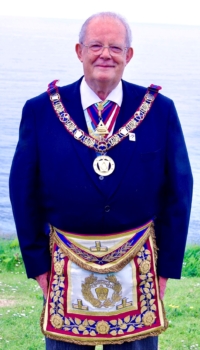 12th Mark Provincial Grand Master
of
The Province of Cornwall

He has also been very active in other Degrees being a member of the Craft, Royal Arch, Royal Ark Mariners and Rose Croix and has passed through the Chair in all Degrees.

Right Worshipful Brother Kevin is a committed family man being married to his wife Sue for almost 40 years, they have a daughter, a son, a Granddaughter and three Grandsons.

He has also been a keen sportsman representing Cornwall and England at Clay Pigeon Shooting, (being Captain on numerous occasion), Cornwall Bowls indoors and out, and played Rugby for Truro. He is an avid follower of the Cornish Pirates and England Rugby teams. 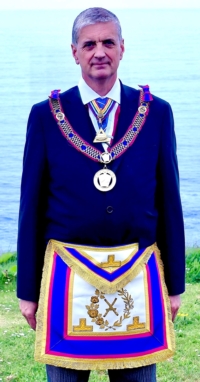 Worshipful Brother Peter Furness joined The lodge of the Three Grand Principles No 967 (Craft) in 1994. He progressed through the offices and became Master of the Lodge in 2002.
He was appointed Provincial Grand Junior Deacon in 2009 and promoted to the rank of Past Provincial Grand Registrar in 2016.

His Mark Masonic career began in 1995 when he was Advanced in The Three Grand Principles Lodge No 879. After progressing through the various positions in the Lodge, he became Master in 2005. His first Provincial appointment in the Mark Degree was as Provincial Grand Sword Bearer in 2009. In 2011 he was appointed as Provincial Grand Treasurer and then to Provincial Grand Director of Ceremonies in 20014.

Grand rank came in 2013 when he was appointed as Past Assistant Grand Sword Bearer and in 2017 was promoted to Grand Assistant director of Ceremonies (Active).

Also a member of St Michaels Lodge No 175 and Edward Perry Morgan Lodge No. 1632. 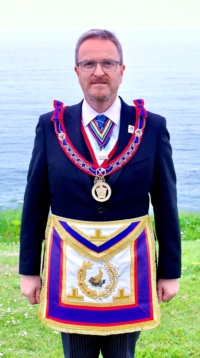 Worshipful Brother Mike Pritchard was initiated in St Piran’s Craft Lodge No. 7620 in 2005 and progressed to Worshipful Master in 2012.  He was appointed as Provincial Grand Steward in 2016 and then Provincial Grand Charity Steward in 2017, an office he holds today.  In 2019 was promoted to Past Provincial Junior Grand Warden and in June 2021 was Promoted to Grand Rank to the office of Past Assistant Grand Director of Ceremonies.  He is a Past Master of The Robert Eliot Lodge No. 9483 and a member of the Cornish Installed Masters No. 3324.

Worshipful Brother Mike’s Mark journey began when he was Advanced in Trevaunance Lodge of Mark Master Masons No. 1023 in 2006, soon after becoming the Lodge Secretary. In 2008 he joined the Lyver Ha Pluvenn lodge, No. 1884 and is also a member of The Cornish Installed Mark Masters No. 1332, Meridian No. 73, and The Edwin Perry Morgan Mark Lodge No. 1632.  Worship Brother Mike is a Past Master of Meridian Lodge No 73.

In 2015 he was appointed as the Provincial Assistant Grand Secretary and was further promoted to Provincial Deputy Grand Secretary in 2019.  In the same year Worshipful Brother Mike was honoured with an Active Grand Rank as Grand Steward and now a member of the Grand Steward’s Lodge.  In September 2022 Worshipful Brother Mike received a Grand Rank promotion to Past Grand Junior Deacon.

Worshipful Brother Mike has been married to Karen for 30 years and has two children Katherine and Matthew. He was a member of Camborne, Helston, and St Austell Brass Bands, playing at the highest level, nationally, for over 25 years.  A rugby enthusiast, he attained an RFU Level two coaching badge, coaching his sons junior rugby team and is a season ticket holder at Exeter Chiefs.